Stop whatever you are doing right now and watch the new Friday The 13th Video Game trailer. I don’t care if you have to pick your fucking kid up from soccer practice or you need to give your husband his diabetes medication. They can fucking wait.

Ok now that you watched it, your little brat hates you and you put a bite sized twix in your passed our husbands mouth we can talk about how that fucking trailer may just be the best video game trailer of all time.

As you all know from reading my previous posts… or at least I hope you read them, I am a huge fan of horror movies and when it comes to video games based on movies we as gamers get the shit end of the deal. I have had my eyes set on this Friday the 13th game for a while now, following it from video releases of the alpha phases hoping that it would be THAT movie game we have all waited for and HOTDAMN I think it will be. The trailer doesn’t display the gameplay but it does showcase the best parts of what is to come. From my understanding, it is a similar system to Evolve just flip flopped in the monsters favor. In Evolve you can play as a number of different hunters trying to take down another player who is the monster in an arena and for the most part the hunters have the upper hand until late into a match where the monster can Evolve enough to actually TPK a team of hunters. Friday the 13th is the opposite. The main goal is for the campers to survive the night or get to an extraction point while being hunted and as we can see, brutally murdered one by one in absolutely majestic fashions. Jason is the overpowered lumbering monstrosity that is on a never ending onslaught to rid Camp Crystal Lake of horny teens and poor virgin nerds and by God does he display his mechanical prowess in this trailer. I found myself literally laughing out loud at how well he is represented in this video game format, just an enormous emotionless hulk crushing skulls and tearing campers apart limb from bloody limb. I almost spit my delicious Coors Lite all over my laptop when he jabbed a spear through the girls face, took a moment to appreciate his artwork then nonchalantly pull it out the back end of her head to go murder another counselor. This is what a Friday the 13th game needs to look like. Jason Voorhees does not give a shit about your leatherman captains jacket from your football highschool team, or how Debbie has been sleeping around with Brian behind Todd’s back, or even if Nigel just aced his calculus exam and is hoping to get Susie drunk this weekend and maybe lose his virginity. No Jason Voorhees has one thing on his mind and that is to clean up Camp Crystal Lake from all of these meddling kids and fuck he does it in style all with an awesome 80s soundtrack in the background. 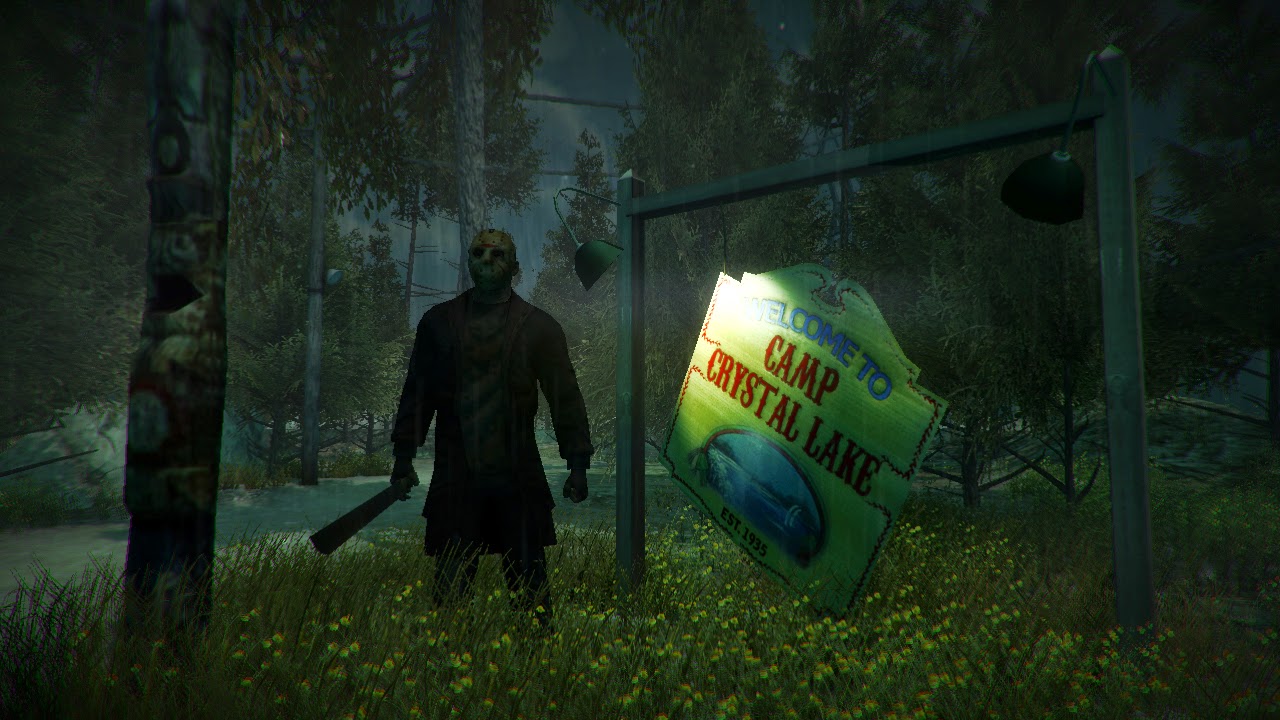 I am blown away by this trailer and I have such high expectations for what the final product will be for Friday the 13th The Game. From what I’ve heard it should have expansions after launch too, so slaughtering camp counselors should never get stale.  As shitty as Jason X was, the entire trailer just reminded me of the hilarious scene where he beat two naked computer generated women to death off a tree in sleeping bags.  It is just about time to go slam shots of Jameson and 2$ beers at the bar alone, but at least I can do it with a smile on my face after watching that masterpiece of a trailer.