ELO Hell: I Hope You Enjoy Your Stay

It is safe to say that I am not great at League of Legends but I’m really not too bad. Just like anyone of any skill level, I play the entire spectrum of bad and good plays but I try my best as often as I can and pride myself in my progression in nearly 3 years of League. I started playing with a few college friends and got hooked right off the bat due to its extreme competitive elements. When I finally hit level 30 I shot for ranked and won 7 out of my 10 placement matches to get placed in Silver 4. Not too bad for losing my ranked virginity. I soon found out the hidden face of League in Solo Queue. I may have tried too much, but the community also had some play in my descent to Bronze 4. For a game I held so dearly, I was let down so hard but toxic players, feeders, and my apparent sub par skills. Who fucking cares if you make one mistake, even pros make mistakes, this shouldn’t give anyone the right to propose death threats, rage, and eventually quit the game. I can’t count how many times I have witnessed legitimate verbal harassment in this game. Calling people retards, and morons, and saying shit about moms…even though I’ve played enough COD, this community was easily the most toxic of any multiplayer game I’ve ever played.

Regardless, I made it my duty to climb the ladder back to Silver and it was grueling and I wanted to bash my skull off my wall far too many times, but I did it. I made it all the way up to Silver 1 with like 80 LP, just a few wins away from Gold and history repeated itself. Prepubescent teens started raging in ranked and I plummeted back to Silver 4, then the Season ended. I took a few months off and got back to my regular console gaming for the most part, but I decided to give it another shot and see where I left off. I practiced for a few weeks in normals before jumping back into Ranked and ended up winning 8/10 of my placement matches…I got placed in bronze 2… How the fuck does that work Riot? I got further with less last season and even ended in Silver. The system just isn’t intuitive.

I managed to climb my ass back up the elo ladder after several occasions of feeders and AFKers losing series for me. I can’t even bring up how toxic every bronze and Silver player is because they all believe they should be Platinum. It is scary to think that finding a team of 4 other people who just want to have fun and are friendly is so incredibly rare. 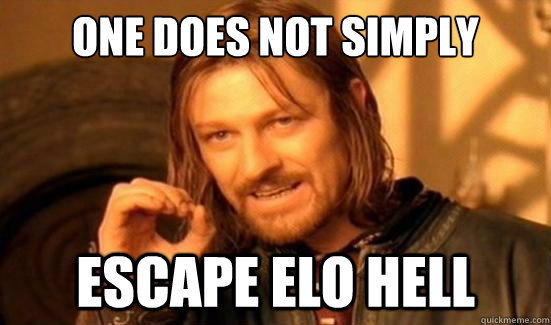 Elo Hell is the idea that once you get placed in a low rank it is nearly impossible to climb your way out. I say nearly because my two friends who introduced me to League almost three years ago have both climbed from Bronze to Gold and Platinum. Shoutout to D and Jorge. When you win a game you gain LP and once you hit 100 LP in your division you get placed in a series with other people also in their series, to move up a tier. You need to win the majority of these games to rank up but it is not an easy task. Since you get placed with other players who are in their series, it is a terrifying 3-5 games because there is nothing more dangerous than a starved rabid dog backed into a corner. This is easily where players are most toxic so be aware. Your MMR is your hidden stat that pretty much says what tier you should be in for ranked. If your MMR is lower then you will lose more LP and gain less, but if your MMR is higher than the opposite will occur, you will gain more LP with wins and lose less. The math is there guys, so I can’t totally agree with people who say getting out of Elo Hell is impossible. I have seen it personally, and I have tasted the sweet sweet elixir they call “almost Gold”. The climb always feels unfair, and its almost like Riot is just forcing you to swim upstream in a down flowing river of shit, but it is doable. It is a long and daunting journey and see if you can find someone to match up with for dynamic queue. Also try to get really good at a few champions in each role so you are ready for anything, but git real gud with a few champions in your main role. For example, I climbed from bronze 3 to Silver 4 with Annie and Fizz in the mid lane, Dr. Mundo top, and Ammumu Jungle. Find a lane you excel at, find champions you excel with and put on some wrist guards because if you want to climb out of Elo Hell, you have some very long nights ahead of you.