If you guys have not already heard League is teasing their next champion release.  It has been a little bit since Taliyah was released and it’s crazy to even say that.  Back when I first started the game Riot would release like 3 or 4 fucking champions a year, now they release almost 10.  You new generation League players have it fucking good.  Anyway, Riot has been known to throw out some really creative teasers for new champion releases.  For example, the introduction of Poros for Braum, the random creepy laughs in river for Tahm Kench, Wolf’s symbol appearing randomly after death for Kindred, the list goes on.

Rito added to their code “SMTH In Brush” so when you walked to lane one of the inner brushes would start making noises, and it sounded like a teenage velociraptor finding his first nudey mag.  This was their very first teaser for the new champ. Riot took to the streets and threw out IRL teasers.  Posters have been put up in internet cafes in both Spain and Turkey to stir up some buzz and get players guessing.  There are 3 total posters and I can give you my take on what I think we will be seeing for our next champion, Kled.

Our first image shows us what looks to be some two legged lizard that is running away “into the brush” from some river battles, as explained in the translation, and it was signed by Kled. This tells us that the creature is not actually Kled, but some cowardice creature Kled is searching for and the next poster starts to explain a little more.

Here we learn that this creature is in fact a “magical mount”, that is now no longer a coward, but “runs tirelessly and only straight”, so this lil guy is getting some strange recognition after the last poster. So from this we can infer that Kled is searching for his mount who apparently smells worse than Sion. Let’s see what the last poster can show us. 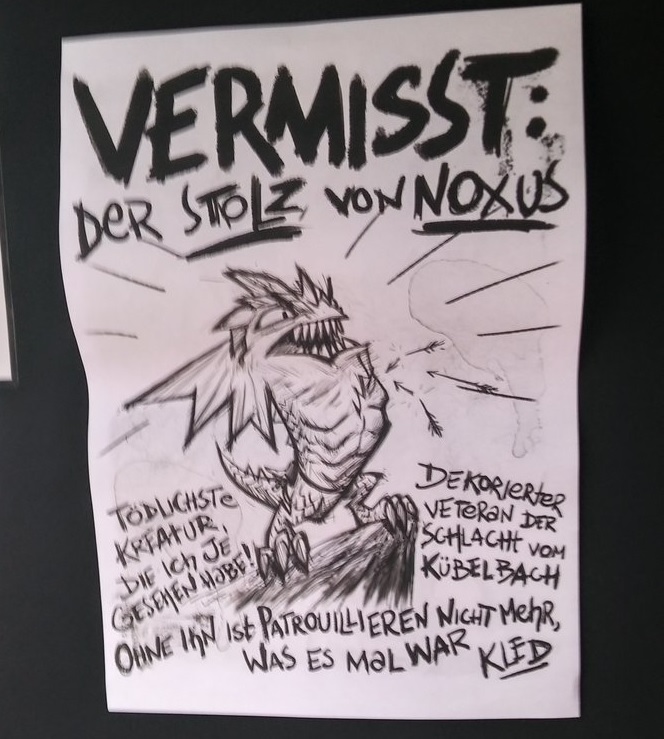 FUCKING BOOM! Who let Drogon onto Summoner’s Rift? That little scared lizard we saw on poster 1 running away from everything is now a giant fucking dragon that is just bouncing arrows off of his rock hard 8 pack abs. He is given the title of Noxius Pride and is to be considered the most dangerous creature in Noxus. I don’t know about you guys but I want a dragon mount with an 8 pack.

So I think that we are going to have a rider and mount combo similar to Sejuani and her Boar. However, I think it may be so much more than just a mount character. I feel like this creature may go through rage/courage phases similar to Gnar. I say courage phases, because of how the mount is described to be a coward in poster 1. I see it as having the potential to change through 3 different phases which can influence your playstyle in lane and in team fights similar to Gnar. Each poster could represent his temperament. The first phase could be a weaker defensive stat phase where your ideal staystyle would be to play passive and farm. After a little while the courage of your mount could build up where he is no longer a coward and you can begin trading in lane and going into skirmishes similar to Mini Gnar. His finale stage of courage could be his transformation into the giant fucking dragon we see in the last poster where you want to engage and team fight as much as possible just like Mega Gnar. I don’t think anyone else has tried to make the connection between Kled’s Mount and Gnar but I feel as though Gnar may not have been the only creature that survuved from his time. We may also have a hint at one of his abilities, being the “running tirelessly and only straight”. This could be a mechanic similar to Aurelian Sol’s Comet of the Legend. It may be safe to say that Kled is some Noxus general with a magical mount, but I think this new champion is going to have a bunch of characteristics drawn from other champions. I look forward to seeing the final product here and can;t wait to see if I was right about any of my predictions.

Let me know in the comments what you thought was the best New Champion Teaser, and what you thinkwe may see from this new champion.