As of yesterday, two brand new Battle Royale games have launched in Early Access on Steam, so being the hyper competitive multiplayer gamer that I am, I decided to give them a try.  When I say “give them a try”…I really mean, only 1 of the 2 worked.  In this modern day and age in stale gaming, where the run of the mill Battle Royale dominates the landscape, there is so little room for new and innovative multiplayer games to find their spot in the industry and culture to flourish.  So as we venture head first further into the realm of Battle Royale dominated gaming, the quote “If you can’t beat them, join them” rings even more so true today.  It is always good to get some new and refreshing takes on the genre that has been dominated by Fortnite and PUBG. 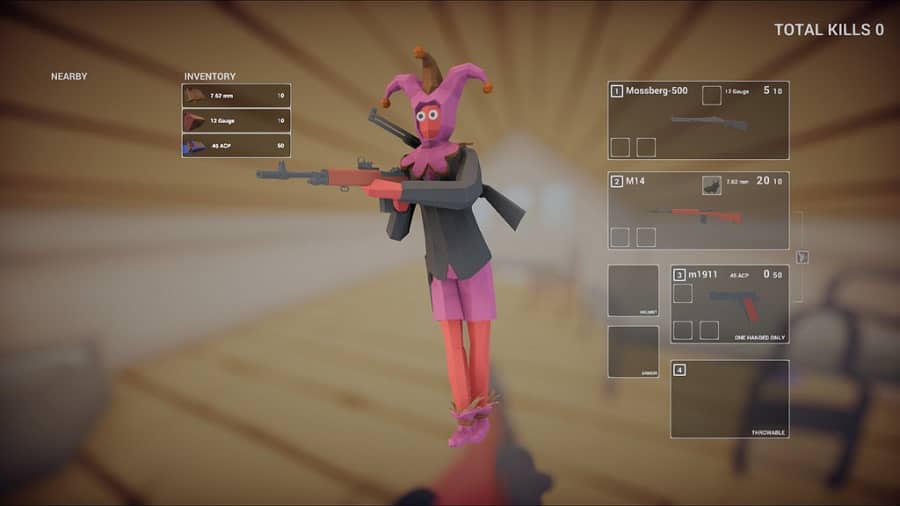 Totally Accurate Battlegrounds is the Monty Python of the Battle Royale genre.  Graphically, the game is like a degraded version of Octodad with similar movement animations to Human Fall Flat, but it is meant to be that way.  You aren’t supposed to take this game seriously, which is why it is a perfect palette cleanser to the slow paced nature of PUBG and the sweaty build off sessions in FortNite.  Totally Accurate Battlegrounds is a hilarious spoof of Battle Royale games, I just wish I was actually able to play it.  Turns out the NA server shit the bed after a few hours in Early Access so currently the only way to play is on an EU or Chinese server.  Hopefully, I will be able to get some gametime in and give a more detailed description of my thoughts on it.

The other Battle Royale, Realm Royale, comes from the hero shooter developer of Paladins,  Hi-Rez Studios….which was just announced this morning to be coming to the Nintendo Switch next week.  Similar to how FortNite Battle Royale came as a side project branching off of their Save The World campaign, Realm Royale is a spinoff of the Paladins hero shooter.  Plenty of comparisons can be extrapolated from FortNite, but Realm Royale truly was a refreshing new addition to the Battle Royale genre.  I was able to get a few hours of gameplay under my belt last night and honestly had more fun in Realm Royale than I’ve had in most BRs recently.  Realm Royale is graphically equivalent to FortNite with, in my opinion, a larger and more varied map.  The gunplay is also very similar with a selection of different guns that can vary in quality by rarity, however, the trouble of managing ammo has been eliminated with a reload cooldown.  Two new and VERY REFRESHING mechanical additions to this battle royale format have been added, and I can attest so much of the fun I had with it last night to.  You can select a class before each match which each starts with 1 movement ability to help you traverse the map and maneuver around gun fights, but you can also find class specific spells in chests while looting that fit the gameplay and thematics of your class.  I played Mage the most, so you are able to Fly as your movement ability and can find offensive fire spells and defensive ice spells to utilize.  The other mechanic is a light crafting system.  You are able to disenchant lesser quality items and items you already have for essence which can be used at a forge to create Armor or Health potions and/or Legendary quality Weapons or Spells for your class as well as Legendary Armor.  You are also given a Mount that you can access just by clicking Z to traverse the map more quickly.  As of right now, Totally Accurate Battlegrounds looks like a good palette cleanser meme type of BR that could be a solid time with friends and for a stream.  Realm Royale absolutely has some potential to be a standout Battle Royale game with its new and innovative mechanics that really separate itself from the others.  Both games are in very Early Access but are free to download and play right now (Totally Accurate NA Server are still down for now), so give them a shot and let me know what you think about them in the comments below.