(As this is a review, it should go without saying that there may be some spoilers included.)

They Came From Below is the first DLC released for Compulsion Games / Gearbox’s, We Happy Few with a refreshing new take on what is going DOWN as we return to Wellington Wells.  They Came From Below is a much more condensed and linear story being told in comparison to the open sandbox nature of the core game which I believe amplifies the, far out there yet still grounding, narrative.

You play as Roger, assisted by his partner James, tasked with finding the now missing Dr. Faraday.  What enfolds is an engrossing tale of twists and turns through the underground caverns below Dr. Faraday’s lab,battling through hordes of robots, solving puzzles with light platforming elements, all driven by a touching and beautifully explored relationship between our main character and his partner.

As with the main campaign, They Came From Below is visually gorgeous with the neon palette coming into full effect through the caverns and mechanical instrumentation of Dr. Faraday’s underground lab.  Roger is the more adventurous of the two and, equipped with a Ray Gun that can shoot rapid small projectiles, charge up larger more damaging blasts, is upgraded throughout the DLC, and can turn into a Mace when the energy needs to be recharged for melee combat.  My playthrough of the main campaign revolved heavily around stealth mechanics, however, They Came From Below takes a more head on approach making combat more involved.  I found myself using the old Dark Souls Fishing mechanics where you shoot one enemy to draw their attention to you from afar and blast them away as they approach not alerting any of the other robots nearby.  This proved to be successful for just about every part of the DLC besides the arena zones you get dropped into every so often.

Gameplay revolves around the same loops of, explore this area, find these objects, solve these puzzles, fight these robots and report back.  Some might find this repetitive but it plays out well in the short, sub 2 hours time it took me to get through it all.  This has been a point of contention for other reviewers, saying how they wish They Came From Below was longer.  I completely disagree.  With the linear format and narratively driven nature, fueled by the roller coaster of emotions that is Roger and James’ relationship, anything longer than 2 or 3 hours may have seemed drawn out.  As your progress through the cavernous lab facility, you learn more about who Roger and James both are and the complications of being together in their community.  Roger is more of a philosophically rounded protagonist who is propelled by the need to desire to understand what the robots truly are, where they came from, and about half way through the DLC, how he can save them.  James was in the military before all of this and it shows as he tends to lean more in line with the, “let’s do as we are told” side of issues.  Their experience in the lab together plays out similar to the walkie talkie relationship in FireWatch.  About halfway through, Roger begins to realize that these robots are sentient and can actually feel emotions similar to that of humans.  When you regroup with James again right after a brilliant debate sparks about humanity, empathy, and the savagery that Dr. Faraday has been implementing onto these robots whom come from another plane.  On one hand, Dr. Faraday has found a way to help feed her people, but at the cost of sacrificing an entire race of sentient robots in the process.  On the other hand, Roger believes the two species can someday coexist and prosper together.  This all culminates into a pretty straight forward boss battle with Dr. Faraday’s giant TV robot.  Upon defeating her you get a brief conversation with the robots at the portal and are given the chance to join them to convince them to one day give humanity another chance.  James expresses the fact hat you need to go and explore their world and you’re given the option to convince him to join you or leave without him.  I’m a sucker for happy endings so of course I convinced him to come as they embrace, then walk hand in hand lovingly into the portal. 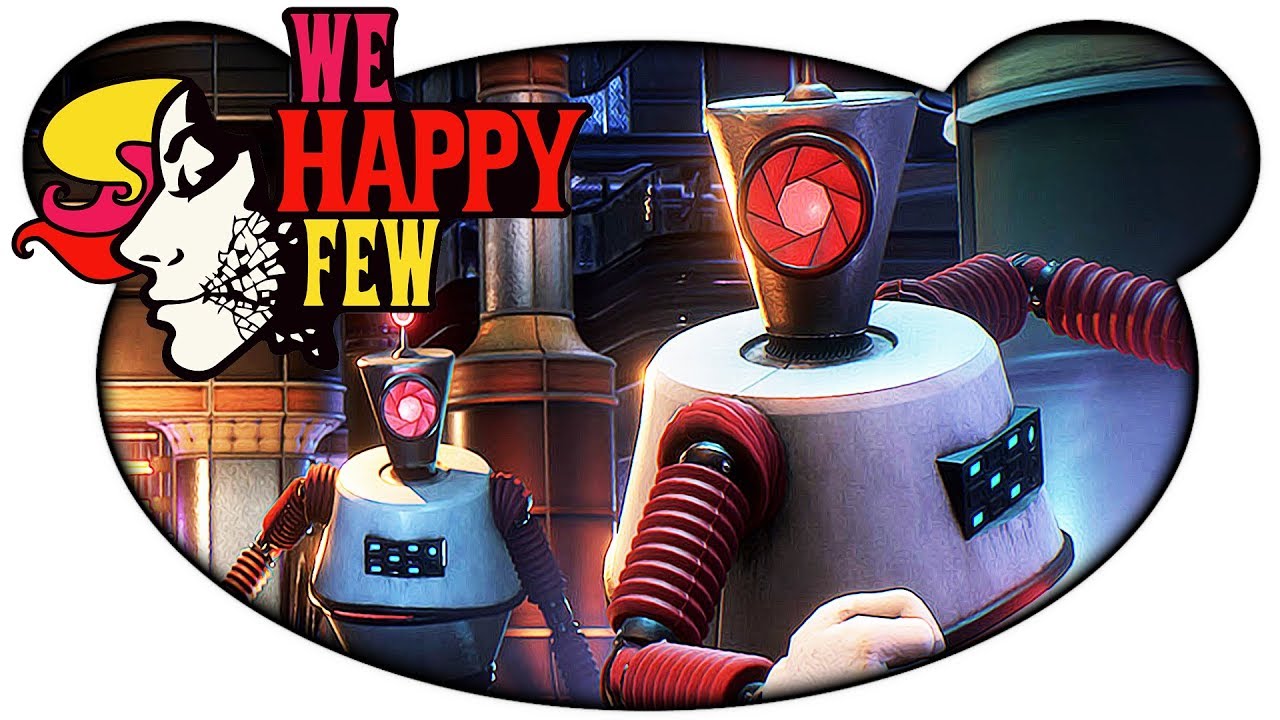 As stated before, They Came From Below is a well crafted tale of philosophical exploration that is fit perfectly into a short 2 hour playthrough.  The game is visually gorgeous to look at, the combat is more tuned this time around, the characters are charming, and the plot is engrossing.  Compulsion Games did a great job with We Happy Few’s first DLC, and I am excited for what else they have lined up.

We Happy Few: They Came From Below

4.5 Sentient Robots Parts out of 5