With the major info dump and new trailer for Pokemon Scarlet and Violet at the start of the month, I’ve come to the conclusion that this next generation may be the best one yet. Or, it may struggle (not fail) spectacularly by limitations of new graphical and gameplay features, kind of like what fans complained about with Sword/Shield and Arceus.

Pokemon has kind of been undergoing its second renaissance lately from the launch of its titles on the Switch. And with the recent departure of Juichi Masuda from Game Freak after this gen, it seems that the developers of the mainline games may be undergoing an evolution themselves. Hopefully for the better! However, Masuda will continue to oversee Pokemon as a franchise as “Chief Creative Fellow”. I’m not sure what that means, but I imagine it’s quite the cushy promotion for one of Pokemon’s oldest and most treasured figures.

As for talking about the major details that arrived on June 1st, I’m going to divide this blog into separate sections in order to further breakdown everything we know so far about this game.

It seems Game Freak is really doubling down on its open world/online multiplayer approach to the series by adding online multiplayer with up to 4 people roaming the world at once. What this will entail and how this will work we are not sure of. But Pokemon’s official press release describes it as:

Pokémon Scarlet and Pokémon Violet are the first open-world RPGs in the Pokémon series. Along with series staples, such as trading and battling Pokémon, players will be able to explore the various locations of the region in these games with up to four players.

“First Open-World” may mean that this is the first TRULY open-world Pokemon game. This definitely will delight fans who expected more of the open exploration from SwSh and Arceus. Assuming this means that there will be no instances between areas, no loading screens to get to a city or building, etc. How well they will pull this off and if it’s execution will be seen at release. But I like to be optimistic when it comes to these mainline titles.

If you take a close look at the trailer, you’ll see these pop up shops that seem to replace pokemon centers out in the open world. Which is neat not having to travel to a city and just having these out by landmarks and things. I believe this will streamline gameplay a little. Instead of having to travel to and from town, to stock up on those pokeballs you’ll definitely be using.

From the trailer, it seems my boy Gengar is back along with a few other previous gen pokemon. Whether this game will have a select roster like SwSh and Arceus, is also up to speculation.Or if they will even include Hisuian variants from Arceus at all. A few of the new arrivals of pokemon include this pig that the internet has absolutely lost its mind over.

This little piglet is described by the Pokemon Company as follows:

Lechonk uses its sense of smell to find and eat only the most fragrant wild grasses and the richest Berries. As a result of its dining habits, it has come to radiate an aroma resembling herbs that Bug-type Pokémon dislike. If attacked by an opponent and startled, it will charge forward in a panic. It may appear fat at first glance, but in reality, the Pokémon’s body is mostly muscle built by constantly walking around in search of food.

These are the current stats we know about this little chonker

Gluttony definitely makes it seem like this pokemon will be defensive in nature and rely on berries in battle. And Aroma Veil makes it a good utility for when an opponent’s moves restricts your selection of your own moves. Not sure how well its moveset will complement this, but I look forward to how it will evolve and play competitively.

The oil that comes out of its head has a very strong bitter taste, and it is not suitable for consumption. When startled or attacked, Smoliv will shoot this oil out, slowing its opponent down. It will then seize that moment to run away. In the fruit on its head, Smoliv stores oil made from nutrients it gathers through photosynthesis. As a result, it can go for a week without eating or drinking. It prefers dry and sunny climates, and it seems to spend its days sunbathing.

This little olive boy/girl is another mon that the internet has collectively decided to meme into oblivion. What we know about it is limited but we do know it will be a Grass/Normal type.

I’m assuming it’ll be a utility Pokemon with its ability “Early Bird”, allowing it to wake up faster from sleep. But other than that I really can’t tell how it will play out in battle.

It seems this little guy is the new “Pikachu” of this generation. Its ability Static will have a chance to paralyze its opponents on contact moves. Natural Cure is entirely different, allowing it to heal from status conditions when it’s swapped out with other pokemon. 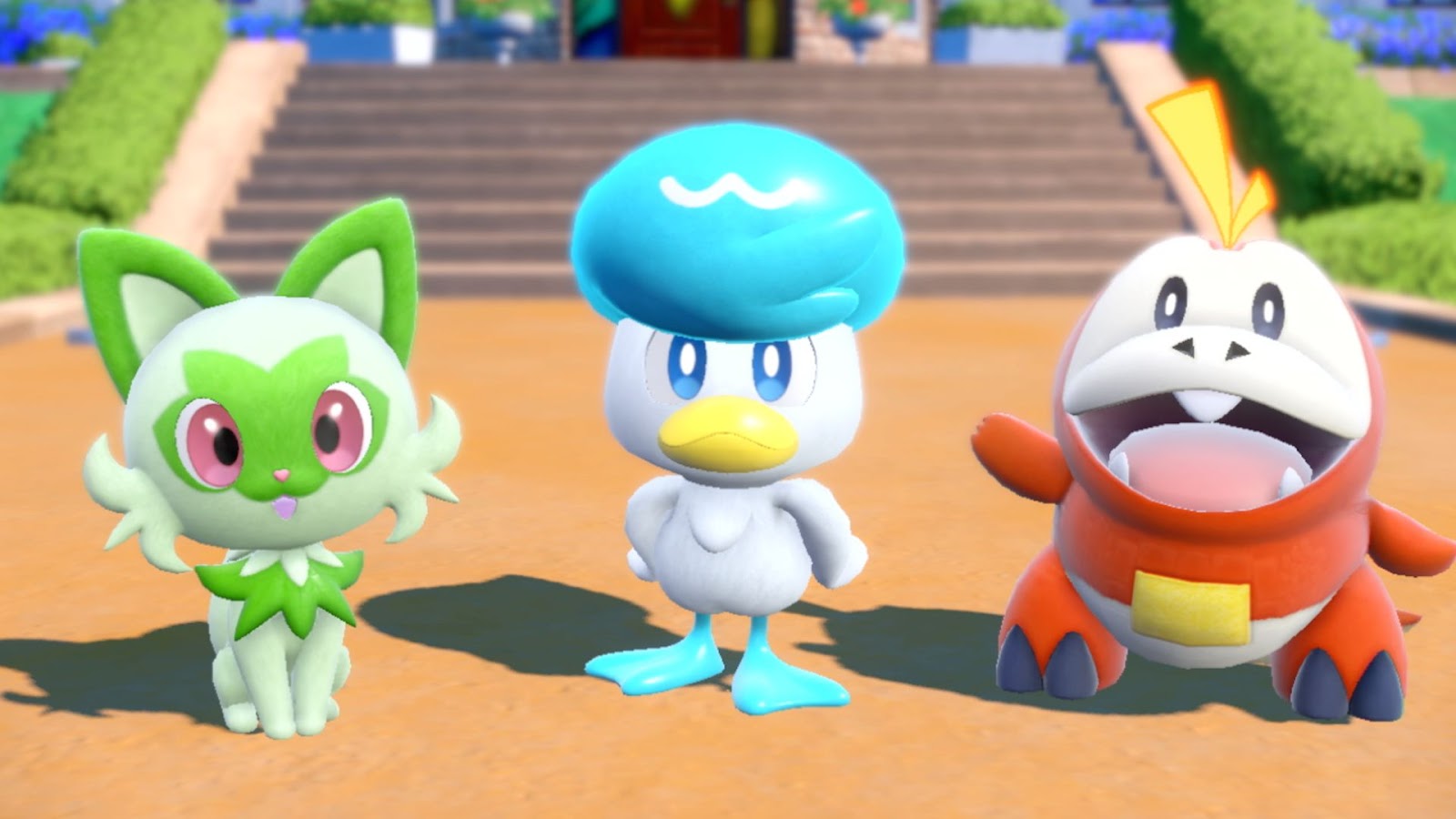 Along with three new pokemon and two new legendaries revealed (which I will mention later in this article), we also got some new information about the starter pokemon:

Capricious and attention seeking, it may sulk if it sees its Trainer giving attention to a Pokémon other than itself. When Sprigatito kneads and rubs with its forepaws, a sweet aroma is released that can mesmerize those around it. This aroma has therapeutic qualities and makes opponents lose their will to battle. The composition of its fluffy fur is similar to plants, letting it create energy by absorbing sunlight. It adds moisture to its fur by grooming itself, which aids its ability to photosynthesize.

This grassy cat is, (you guessed it!) a grass type! Who would have thought? With the ability, Overgrow it will hit harder with grass moves when its HP is low!

Fuecoco is laid-back and does things at its own pace. It loves to eat, and it will sprint toward any food it finds with a glint in its eye. External heat is absorbed by the square scales on Fuecoco’s stomach and back, then converted into fire energy. These scales are always warm, and at times they can also grow very hot. Flickering atop Fuecoco’s head is fire energy that is leaking out from inside the Pokémon’s body. When Fuecoco gets excited, its head spouts more flames.

This little crocodile dundee’s ability is Blaze. Which I’m sure with the previous “weed cat” people will get a kick out of. Like Spriggato, Blaze will power up its fire type moves in a “pinch” AKA when it’s low on HP.

And last but not least of the starters:

This serious-mannered Pokémon will follow in its Trainer’s wake. Quaxly is tidy, and it especially dislikes getting its head dirty. Its body is always glossy because the gel secreted by its feathers repels water and grime. The coif on its head is slicked back using a rich, moist cream, and it becomes unkempt when dry. It has strong legs and can swim without difficulty even in places with strong currents. In battle, it kicks its opponents swiftly and repeatedly.

This Donald Duck lookalike is equipped with the ability Torrent. Which like the previous two, powers up its water type moves when its HP is low.

It seems these guys are very similar mechanics wise (so far), and I’m interested to see how they develop as they evolve.

These lizard boys seem to solidify the overall theme of past and future. The Scarlet title’s embossed and feathered logo seem to influence a more Jurassic feeling. And Violet’s seems more electric, futurist, and cyberpunk with its jet legs. Their names are Koraidon and Miraidon, respectively, and that’s all we know about them (besides being lizards and exclusive to each version). People have been comparing them to bikes which have led to many memes of games on motorcycles:

For the first time ever, we get not one, but TWO Pokemon Professors exclusive to Scarlet and Violet. Professor Sada and Professor Turo, respectively. Both of their designs further speculate that this generation will be themed around past, and future. With Turo sporting a Tron look, and Sada wearing the cavewoman, “unga-bunga, hit him with a rock” outfit. Each professor is described to be delving into the lore of the region.

And with that we get our new rival!

Nemona has a sunny, energetic disposition and is passionate about Pokémon battles. She’s an experienced Pokémon Trainer and serves as a friend and reliable guide for players on their adventures.

The Pokemon Company also mentioned that this newbie is going to use the three new featured pokemon I mentioned earlier. Not much is known about her so far, but she seems very spirited and willing to battle!

That’s Great But What About Battling?

It seems from the trailer that we will have battles similar to Sword/Shield returning to its classic turn-based mechanics. I wonder if we will see a shakeup in a new gimmick like Gigantamax, or Mega-Evolution in previous gens.

There’s much to wonder about! But so far, this generation of Pokemon is looking mighty fine!

2 thoughts on “Pokemon Scarlet/Violet – Everything We Know”