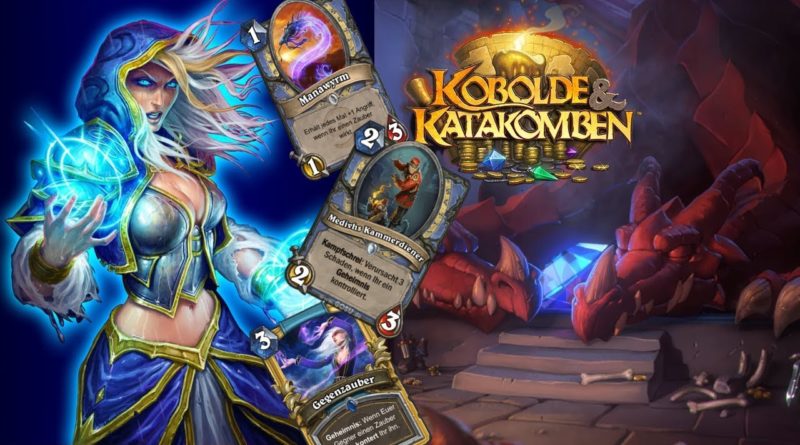 I know I know, you all expect me to say I’m a top ranked Hearthstone player who sits at the top of the leaderboards consistently and has been grinding through expansions since launch.  I, however, must tell you to hold on for a few more expansions, so I can catch in cards and decks overall and then you can come visit your favorite Degenerate Journalist Doctor at your local FireSide Gathering where you can witness me absolutely dominating any and all competition.  Until that point, I will more than likely have to continue piecing together my own decently tiered decks with varying success in each.  The current ranked meta of Hearthstone is a decent split of control in Warlock and Mage as well as aggro in Paladin.  With Mage being my favorite class in Hearthstone, I figured I would make it my goal to build a fairly successful deviant of the somewhat common Secret Tempo Mage.

I took most of the core deck, swapped out a few of the cards I didn’t deem completely essential, made adequate replacements for cards I did not already own, and teched in a few counters to certain popular decks being run at the moment.  The early game purpose of the deck is to play small minions such as Arcanologists to draw secrets from your deck, play Kabal Lackey and Kirin Tor Mage to put out said secrets for free, then follow up with Medivh’s Valets for additional damage distributed where you need.  The idea is to chip away at your opponent in order to get them within range of your mid to late game burn cards.  This is where Frostbolts and Fireballs come into play, with Frostbolts being a good flex option to either put damage on the opponent’s face or to help with board control.  Early chip damage comes in the form of small minions and Explosive Rune Secrets.  Counterspell can be an absolute game changer against most Priest spells, Dark Pacts on Possessed lackeys for Warlock, and so many other well timed situational moments.  I have had just as many wins come from players conceding after a well timed Counterspell as I have with rushing down opponents with board pressure and over the top burn.  Due to Aluneth, the Mage legendary weapon, costing 1,600 dust, I replaced it with two Arcane Intellects for draw.  I teched in a polymorph for VoidLords because in those match ups, the vast majority of your wins need to come before turn 6 or 7 before they can put up the wall and heal with spellstones and so on.  I also decided to put in 2 Blizzards and 1 Flamestrike to help with board swarming nature of the aggressive Paladin decks out there where board control is almost as important as the mid game burn spells.  I also do not have a PyroBlast for that “nail in the coffin” play come turn 10, so I have an additional Fireland’s Portal and have recently teched in Frost Lich Jaina because…well, it’s pretty much the best Death Knight card.  It also adds an incredible amount of late game value where you may end up finding yourself winning in Turn 7 of fatigue against a Warlock because they draw cards so much faster than every other deck or completely out valuing Kingsbane Rogues with Water Elementals. The main mindset you need to keep when playing a secret tempo mage deck, or even mine in particular, is that your early game needs to be completely focused on playing the right secrets at the right time, using your small board minions to rack up face damage, and only make value trades if absolutely necessary.  Depending on your RNG, you may very well be able to build up enough board pressure and draw into the right burn cards to win outright by turn 6, but the mid-game is essentially the same as the early game, however, here is where you need to determine whether or not you will in fact have the right amount of burn to win, or if you need to start reassessing if you need to hold out for Frost Lich Jaina, where value trades and Spells may need to be done on board instead of face.  If you are unfortunate enough to make it to late game, staying alive long enough to play Jaina is the main goal.  From here it is just making the right plays in order to get as many Water Elementals on board as you can and out sustaining your opponent.  This deck honestly has pretty decent matchups against most other decks.  You may run into some trouble against the omni-present Control / Cube / Zoo Warlocks.  Big Priest and Big Spell Priest could be difficult depending on the opponent RNG, but all in all I have over a 65% win-rate and have climbed past Rank 10 on ladder with it.  Let me know what you think in the comments, how do you like the deck layout?  What are you thoughts on the current META?